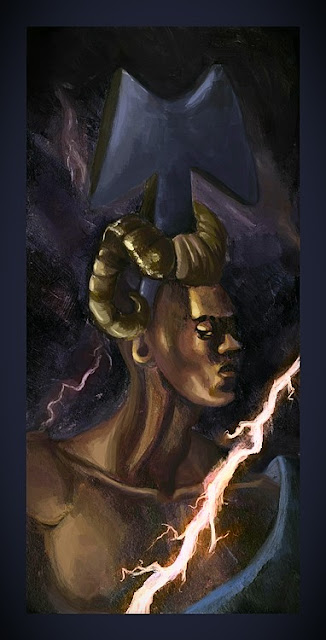 AGAOU  / BELIE BELCAN TOME
I am the Wrath of God,
I am his Roar when the Earth Trembles, I am near!'

Belie Belcan "el Viejo San Miguel" is an Ogun Loa who is viewed as the general of Papa Buen Dios Todopoderos celestial army, and manifests God's energy on earth through storms, hurricanes, the frightening sounds associated with earthquakes and tsunamis.  He is Bon Dye's wrath and justice personified here on earth.  He is the thunder and lightning that strikes the earth, and when he strikes the oceans, which is the domain of his brother Agwe Tawayo, the earth will tremble.  Belie Belcan has a brother of the Agua Dulce Division known as Tindjo Alawe who is synchronized with Saint Rafael, and is a Loa de la Raiz who is a younger indigenous vuelta of the ancient Dahome Agwe.

In Haiti Belie Belcan is akin to or is a vuelta "road / path" of the fierce Lwa known as Agaou, and both are viewed as Bon Dye's divine justice on the earth, they enforce balance and justice.  Agaou is envisioned as a much younger and violent Lwa who is both feared and loved,  while Belie Belcan is viewed as a much older, kinder and benevolent Lwa.  Both are viewed as Lwa of great justice and defenders, not just of ones enemies but also malevolent forces.

Agaou is always accompanied by his younger twin brothers Sobo and Bade.   Sobo is known by various names, such as Papa Sobo, Gran Sobo, Sobo el Grande, Sobo Ke-Souh, Sobocoso, and Sogbo while his twin brother Bade is also known as Badessy.  Papa Sobo or Sogbo can be broken down to mean, Sô "Thunder" and Gbo, "Medicine Man', so he is the Thunderous Medicine Man, who brings forth lightning, but also heals.

Papa Sobo is the great harvester of Lightning and Badeh is a Lwa who harvests wind.  All three are ancient Misterios and belong to the White "Rada" Sky Division, and work under the puntos of fire and air, while Belie Belcan in his vuelta of Agaou is the Jefe chief of his Division, Sogbo and Badessy are viewed as his trusted generals, and each of these Warrior Lwa are well known for their legendery bravery, wisdom and strength.

Papa Sobo is also known as General Sobo, as he often wears earthly Army Generals garments.  He is a great guardian, who protects his children and followers from malignant, supernatural forces, and evil spirits.  He is also known as a Santiguador, and Sobador, "a healer" and is called upon when an individual is suffering a causa, discomfort or problems due to black magic, sorcery. and punishes thieves, liars, criminals, sorcerers and other evildoers who harms those he defends.

Papa Sobo is synchronized with the Catholic Saint Roque, and Bade is often his trusted mascot dog that walks along side him.  Also Saint Cosmos and Saint Damián are often used to represent them, although they are also used to represent the Divine Marassa twins,, these Saints are also used to represent Papa Sogbo and Legba Carrefour, or any divine manifestations of twins and opposing forces.  In this interpretation they are the younger versions of Saint Roch and Saint Lazarus.  Thus Papa Sobo maintains his persona of the great healer, while Legba Carrefour becomes Sagbata / Sakpata, who is known as the Misterio that brings on plagues and diseases, while Sogbo with his lightning heals and purifies.  In this aspect Sakpata "Pata en Llagas / Babalu Aye" is also known as a Misterio of air and wind, that can bring upon airborne illnesses and diseases and is viewed in this concept as a vuelta of Bade.

A West African legends tell the tale of how Sakpata was the lord of the earth while Sobo was the lord of the skies, but at the time both where bitter rivals.  Now at this time Sakpata who was "and still is" the lord of the earth and was one of the Lwa who helped bring civilization to mankind.  This of course was a good thing, but because of his bitter rivalry with his brother Sobo, Sakpata little by little dwindled the veneration and offerings to Papa Sobo.  This of course offended Papa Sobo who punished the earth and its inhabitants by halting the rains of the earth.  This act in turn brought upon a great drought on the face of the earth, that dried the lakes, and rivers, which soon brought with it pestilence, diseases, then death.  The starved, thirsty and disease ridden inhabitants of earth blamed Sakpata for It's misfortunes.  The once handsome Sakpata had become old from the heat of the scorching Sun, his skin wrinkled, his lips chapped, and his skin became rough and dry which then brought scars and lesions all over his body and face, which from half shame and half to protect his fragile skin, he covered his body in straw raffia and sack cloth. "Both materials of earth and air."

Sakpata could not bare to see the misfortunes of his people, and this made him offer what was left of the earth to Papa Sobo, which was the only healthy wild Ram, male Goat left on earth.  He did this In the hopes of appeasing Papa Sobo, this act did appease Papa Sobo, and he let loose a cleansing storm that covered the earth.  When the rains finally stopped, the earth was cleansed, new life grew and the earth was populated once again.

Sadly from that day on Sakpata became not just the lord of the earth, but also the Lord who brought death and disease to the world, a title he carries to this day.    Although Sakpata is known for bringing diseases, like Papa Sobo, he is a great healer, who purifies, heals and cleanses with air, the wind and the making of sacrifices.

Following Cristian tradition Sakpata as a healer and in his Catholic persona of San Lazaro is accompanied by las Tres Marias, las Marassa Trillizas known as María Jacobe, María Magdalena and María de Betania which embody Truth, Love, and Justice or as the three virtues, Faith Hope and Charity.  The version of this story has similar ties to the Biblical story of Noah's Arc, The Plaques of Moses, as well as the Greek and Roman mythology of Pandora's Box.

Papa Sobo is a brave warrior Lwa of strength, labor, hard work and force, this associates him to his brother Ogoun.  He is also a great healer as he heals wounds with the healing properties of Goat horns and in the African Deer antlers.  He is a labourer, who as most of the Ogoun Division works tiredly.  He is petitioned for healing and removing curses as he is petitioned to help one find work, prosperity and all money matters. 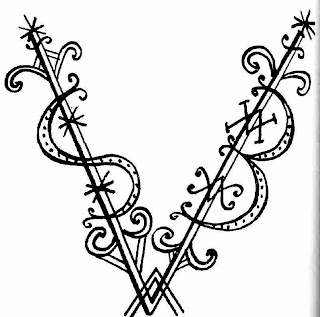 His messenger is the Goat, which is symbolic of his brother Bade, and which also became his symbol when Sakpata made the sacrifice to him, and offered him the horns.  Like most thunder deities in other cultures such as Zues and Thor, Papa Sobo is always accompanied by his weapon of choice which is a Double headed ax made out of the goat horns that Sakpata gave to him, which symbolizes the Goat's horns, and his abilities to strike from both sides, from behind as well as from the front.  Papa Sobo uses it also as a reminder to all those who dare offend or cross him, and as a reminder of when Papa Sobo and Sakpata butted heads, as male goats often do. The Double bladed Ax is often made of wood to represent Sakpata, the Lord of the Earth's offering as well as the sound that is made by the horns of goats that collide in battle, which symbolizes thunder.

Papa Sobo is a gentle Lwa by nature, he is the ideal Vudu Houngan Priest which brings the life giving rains to the earth, but he can be a bit inpatient and is quick to anger, backlash, and when offended becomes the ferocious Bokor Sorcerer who brings thunderous storms.

His colors are white, lime green, red and lime yellow and some add dark royal blue, which is used in his sacred Collares and the fula / pañuelos, his servitors use to adorn Papa Sobo's ritual items.  These colors represent the night sky and the light of Papa Sobo's lightning.

Papa Sobo's feast day "within Sance" falls on the feast day of Saint Roque which is August 16th and he falls under the fire sign of Leo.

Papa Sobo is known by many names in various traditions and each is a vuelta of the same Misterio, he is Chango Macho, Ogou Shango, Hevio Ső, Amadiora and even the Taino Lightning and Thunder Cemi Spirit known as Guataubá.

Papa Sobo in his aspect of Hevio Ső " Heviosső', is not just only a Lwa of rain, lightning and thunder, but also of fire, where he strikes, if life giving rain does not follow, death spawning fire will run ramped; thus he is also a Lwa who can sustains life, but can also take it away.  In this aspect he is close to Papa Ghede and the Barones whom have one foot in the realm of the living and the other in the realm of the dead, thus it is Papa Sobo, and Belie Belcan who taught the Muertero Candelo Cedife the mysteries of harnessing and controlling fire on the earth.  As he is depicted as a twin force with Bade, and Sakpata, he is also in some traditions viewed as the twin brother, who works alongside Ogoun, to harness electricity and to create metal.

O great St. Rocco, deliver us, we beseech thee, from the scourges of God; through thy intercession, preserve our bodies from contagious diseases, and our souls from the contagion of sin.

Obtain for us salubrious air; but, above all, purity of heart.

Assist us to make good use of health, to bear sufferings with patience; and, after thy example, to live in the practice of penance and charity, that we may one day enjoy the happiness which thou has merited by thy virtues.
St. Rocco, pray for us, Amen. 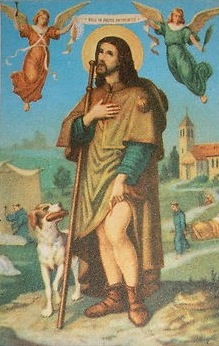 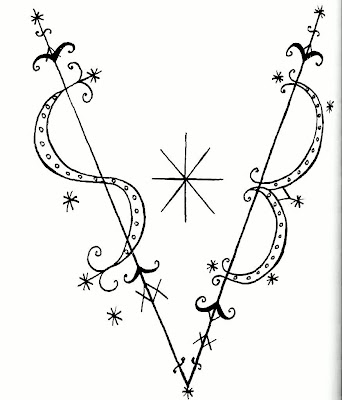 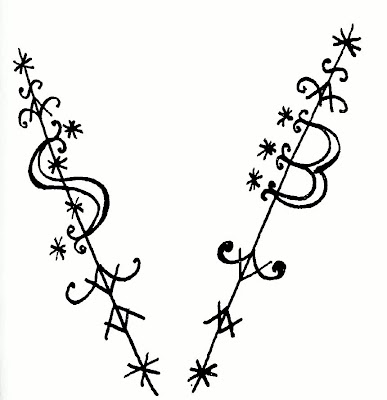 Sancista Brujo Luis
Luz y Progresso, I am Sancista Hermano "Brother" Luis also known as Brujo Luis. I have been professionally practicing variouse traditions of Caribbean Brujeria Witchcraft for over 20 years, since my late teens. I have also been reading Tarot, doing palm readings and giving Spiritual Consultations since the age of 19 to my hispanic community here in Massachusettes. I was born with the sight of clairvoyance as I have seen shadows and felt other worldly presences ever since I could remember. I am a Medium of the Mesa Blanca tradition and baptized a Sancista, and a Santerista all of the Puerto Rican traditions. I also underwent various initiations into the Cuban Santeria Lukumi tradition in the early 90s, receiving my collares and guerrilleros, but I never felt quit comfortable with that Religion, so shortly afterwards I returned to my Puerto Rican eclectic roots and heritage. A spiritual and occult traditions that is as colorful and beautiful as its people. Sance also known as Zancie, Zance, Sanses, Puerto Rican Voodoo or Puerto Rican Umbanda and Mesa Blanca Espiritismo and Santerismo all traditions of the Puerto Rican people.

MY FRIENDS, MY FOLLOWERS